I awake to a starlight morning with a view of the big dipper upside down. We’d crossed the equator twice on route. The roosters are in competition as the sun comes up.
There’s a lot of laughter when I approach the cooks for some Lhukonzo words. It’s the tribal speak in these parts. My attempts at good morning are empathetic. At least they’re smiling. The pots show steam over the wood fires. The outdoor kitchen is well equipped.
Colleen and I take a stroll through the neighbourhood. A dirt path. Soft from the rain. The children smile and giggle when I say wabukire which I pronounce wobachire - meaning good morning. They hear me back. The homes are frames with wood and clay. Cracks appear to ripple their surroundings.
The children wear their environment. Dirty. Belly buttons hang out. We meet an older man with a mattock. He has one eye. His grin spreads his face as he extends his hand to greet us. We return to camp with a parade of laughter from the children along the way.
I meet Gedion. A teacher. His English is very good. After some relaxed talk I pose the question. What is your wish for Uganda today?
“I wish for peace and stability in place. For people to get employed. For living to become better.”
Then I ask him for his wish for the world.
“For international cooperation. If I wish to go to another country, the whole world should be friendly. Inter-dependence – equality. So a country may be dependent on another country. I hope for the exchange of knowledge. Commodities,” he stresses.
There’s romance to visiting Africa. For many it’s believed they can help. I’ve concluded it’s Africa that needs to help Africa. No one else. But we in the developed countries can show them the way.

The PODA project is moving quickly. Many men work making bricks and placing bricks. A skill-building chance for some from Kampala and also the locals here in Bwera.
The last brick is laid on the eastern facing wall. There is clapping. Lunch is called. It’s almost 1 p.m. Clouds and the sounds of thunder threaten. Yet drums beat on in the distance.

A bunch of us drive to nearby Kasese for supplies. There’s a highway. I watch many men push bicycles laden down with wood or matoki. I wonder how far they have to go. No helmets. No bottles of water strapped to their bikes. The heat is high. 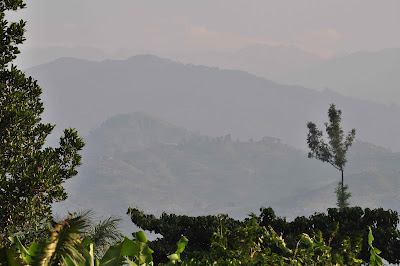 Bwera is mountainous with views of water. I saw a river on the drive. Beautiful yellow birds fly alongside. Their chirp is loud. The sound is happy. I watch storks and cows feed off the roadside garbage. There are distinctly African looking trees. A bellow on top wide-spread. No power lines. Jerry cans carry the water. Nobody has a running tap inside their home. I contemplate how such infrastructure could arrive to areas such as this. Rumours fly that government taxes are soaked up in corruption. Many seek that change.
The change will come - for those who choose to take that path.
Posted by A Fresh Thinker at 00:09

Don't know if you know Julie and Sandy from Victoria? They are coming to work with PODA in January! Maybe u can meet with them when u get home.

A Fresh Thinker
North Vancouver, British Columbia, Canada
Everyday inspiration on life. Dedicated to living, sharing and making a difference. It's what you say and do that counts. Pass it on.