Never thought the day would come. There was a build up. Thoughts. But ultimately the nagging question. What is the best thing for Fred?
Bear was his name when he first greeted me. Full of beans, licks and love. The runt of the litter. The last one to go.
One hundred dollars later, he came to our home at Christmas time with a red ribbon as a gift for my son, Kyle.
Kyle named him. After a racing sailboat named Freid – original spelling varied, to a Swedish or Danish word with the meaning - peace.
Lucky for him I worked at home. He soon warmed my feet. Enjoyed nipping at Kyle’s heels as they raced through the house. Chased socks. Climbed ladders and ran through tall grass like a deer. Kyle nicknamed him Frederick.
Less then a month in he made the mistake of chasing a cat in the early hours without someone on the other end of the leash.
Our friend, Finn had taken him out on his bicycle. Silently he came through the door with Fred in his arms.
“What happened?” I remember saying.
The young driver of the Ford F250 later came by to check on him. Said he’d run over him with both sets of wheels.
Fred survived. Youthful bones. Crushed, but not broken.
He became a sailing dog. Often curling up on the unused sails.
And for me a running partner. The early years pulling me along. But at nine he put the breaks on.
I didn’t understand. Later, swimming one of his favourite games with sticks hurt.
The vet said the most severe osteoarthritis he’d ever seen in his hips. Probably the Lab in him. Not the Border Collie.
We managed the pain. Joint shots at the vet, anti-inflammatory meds, supplements. Some days were really good.
Then somehow, maybe jumping down the stairs into the boat he developed a herniated disc in his back.
Dear Uncle Len built him a ramp to get in and out.
Fred had pals. We often thought he was gay. He LOVED his male friends. He had a share of female buddies too.
Many loving caretakers as well: Diane, Tara and Tim, Irma, mother Alice, Darlene, Chris and Jenny, Alexandria and the entire Bicknell family, Robert and Rose, Brian.
No matter what mood you came to him in, he was happy to see you.
He loved his water. If it diminished and you filled it up mid-stream for him, he’s say thank you by licking your hand.
He had his quirks. Couldn’t take his nose by it without peeing on the bird splat. Squirrels were his favourite chase. My mother, Alice once told me on a walk through the graveyard he chased a squirrel and caught it by the tail. That didn’t help the squirrel.
Fred got the tail. The whole tail.
Heard someone say the other day, with old age – you have to use it or you loose it.
Fred’s senior years weren’t wasted. He’d always do what he could. The grey beard and nose didn’t stop folks who passed by him from saying, “Hello puppy!”
He pranced along like one.
If you ever tried to hang out on the beach and meditate with Fred it wouldn't last more then three minutes. He played a rock game.
He'd find the biggest one and bark and bark. It was a beast he had to tame. He'd playfully pounce on it. Over and over again. Captured. Yet not conquered. It went on and on.
One such vet visit included a pulled tooth. Cracked likely due to the rock game.
The silliest thing about Fred was his morning ritual. A circle in the path he lay it in to sniff it out. Guess he wanted to make sure he remembered what he had for dinner the night before.
Popcorn was his favourite. The more the better. I’d save half my movie popcorn for him for when I got home.
This morning’s walk was the most difficult. We made it an extra block. His panting was heavy. When he went to get into the car, he made it half-way. It’d been the norm of late for assistance in getting up and down. He’d usually ask.
I said goodbye and told him I loved him. I thanked him for being my friend. For always being there for me. For always loving me. For always being happy to see me.
With gratitude to my son, Kyle and my mother, Alice – Fred moved into his next life this morning at 11:40am, with peace and a whole heap of love.
Never to be forgotten.
I know you’re running and free of pain now.
RIP Fred
1998 – 2011 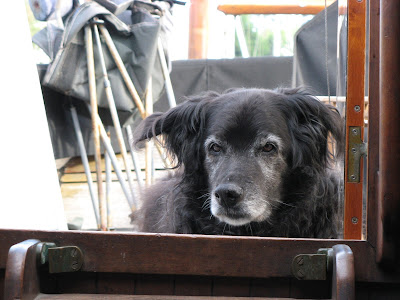 Email ThisBlogThis!Share to TwitterShare to FacebookShare to Pinterest
Labels: loosing a pet, pets, putting a pet down

WHAT A BEAUTIFUL DOG YOU ARE, FRED.
YOU'VE TOUCHED OUR HEARTS.

A Fresh Thinker
North Vancouver, British Columbia, Canada
Everyday inspiration on life. Dedicated to living, sharing and making a difference. It's what you say and do that counts. Pass it on.